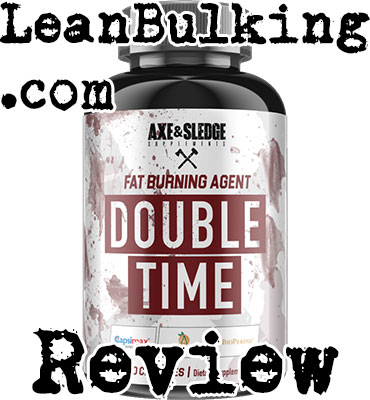 DOUBLE TIME is a fat burner supplement made by Axe and Sledge Supplements. It costs $39.99 on their website, making it a reasonably priced product on the market.

But one small problem we have is with DOUBLE TIME’s serving size; it only offers 2 capsules per day, while studies have shown 3-4 capsules spread throughout the day is optimal for keeping your body ‘topped up’ for prime fat burning.

Anyway, we’ll analyze this fat burner’s nutrient profile for you in the next section. But first, we’ll tell you more about the company behind it.

Who Is Axe and Sledge Supplements?

Axe and Sledge Supplements was founded by Seth Feroce who is absolute beast. Just look at the guy and you’ll know that he’s become a big name in the industry and built a big fan base.

Now, we’re big fans of Seth Feroce – but don’t worry, we’ll still give you our unbiased, honest opinion in this review. We’re not just saying this, but we’re really happy that new companies are starting to add new products on the market.

Why? Because the last couple of years has been a bit of a stalemate in terms of new supplements. And from first glance, Axe and Sledge seems to be going the right way to making some of the best products in the future.

However, we’re not expecting them to get things right first time. After all, who does, right? So with this in mind, let’s see which ingredients have been added to their fat burner, DOUBLE TIME in the section below…

We always believe that the ingredients inside a product is the most important thing you should be looking at.

Why? Because after all the marketing and advertising is said and done, the ingredients determine the product’s safety and effectiveness.

From first glance, we’re actually really happy with what we see. There are no proprietary blends, so you can see the exact dosages of each individual ingredient in Axe and Sledge DOUBLE TIME.

But there are some negatives to this fat burner too. Such as the fact that it contains Bitter Orange Extract, which has been linked with numerous side effects.

We’ll expand on this as we take you through each ingredient inside Axe and Sledge DOUBLE TIME. By the end of this review, you’ll have a good idea of how safe and effective this fat burner really is.

In case you’re wondering, this is basically a form of L-Tyrosine. And L-Tyrosine is a ‘brain booster’ that shown to enhance your cognition.

For this reason, it’s more useful in a nootropic supplement, or even a pre-workout. However, it’s not really necessary in a fat burner such as Axe and Sledge DOUBLE TIME.

Caffeine Anhydrous is the best stimulant that you can find in any supplement, in our honest opinion.

Everyone knows that it works, or coffee of tea wouldn’t be as popular as it is around the world!

However, too much Caffeine Anhydrous can give you too much of an energy boost; we believe fat burners should be designed for ‘everyday’ life, so you should be able to take a serving while sat in an office without bouncing off the walls.

The bad news is that Axe and Sledge DOUBLE TIME contains 125mg Caffeine Anhydrous per capsule. Just to put this into perspective, this is close to what many pre-workouts contain per serving.

For this reason, we believe that the Caffeine Anhydrous dosage is too high per capsule serving. We personally wouldn’t want to take this and drink coffee throughout the day.

A few years ago, Turmeric was just known as an ingredient in cooking Indian food. However, more recently this nutrient has become known for possessing tons of antioxidants and even being an anti-inflammatory agent.

In terms of being in fat burner supplements, we’re not 100% convinced. There simply hasn’t been enough studies to prove that it works, and the ones that show positive results only used obese subjects.

Not only that, it’s easy to include Turmeric as part of your diet by adding it to your meals. So it’s not really cost effective to choose a fat burner purely because it contains this ingredient either.

For these reasons, we believe that there are better options to add into a fat burner supplement; Glucomannan would have been a great ingredient in Axe and Sledge DOUBLE TIME, as it’s proven to suppress your appetite.

Green Tea Extract is one of the main ingredients that we look out for in fat burner supplements. It’s proven to work, and pretty much everyone knows that Green Tea is healthy.

Now, while drinking Green Tea every day is beneficial for your general health, it’s not as good as Green Tea Extract when it comes to fat loss.

Why? Because Green Tea Extract contains concentrated amounts of catechins, which is the antioxidant that’s shown to be so effective at promoting fat loss.

However, the bad news is that Green Tea Extract has been under-dosed in Axe and Sledge DOUBLE TIME; studies show that 500mg dosages are optimal, but there is only 150mg in this fat burner supplement.

As a result, we would recommend checking the dosage of Green Tea Extract when looking for fat burner supplements.

So what makes them so beneficial when unroasted? Well, Green Coffee Beans contain much higher amounts of chlrogenic acid than roasted coffee beans.

In a nutshell, chlorogenic acid is what makes this ingredient such an effective fat burning nutrient. It’s shown to help keep your blood sugar levels steady, to reduce the impact of eating carbohydrates – and keep your body in fat burning mode.

For this reason, we consider Green Coffee Bean Extract to be a key addition to any fat burner supplement. Good job by Axe and Sledge here.

Unfortunately, we personally believe that Dandelion Root Extract isn’t a good addition to a fat burner.

Why? Because it’s a diuretic, meaning it can make you severely dehydrated if your not careful.

Just in case you’re unware, diuretics encourage your to ‘dry up’; this is great for bodybuilders who want to show more vascularity or tone before stepping on stage, but not for the average person.

Basically, losing water weight can fool you into thinking that you’ve lost body fat. For this reason, we see this Dandelion Root Extract being added to fat burners as more of a ‘gimmick’ – unless the fat burner is clearly advertised as containing a diuretic (in our honest opinion).

However, some believe that White Willow Bark Extract can be useful for fat loss too. We’re not convinced though; there simply hasn’t been enough evidence through clinical studies to show this.

So we would have rather seen Glucomannan added to Axe and Sledge DOUBLE TIME instead here.

Choline Bitartrate is an interesting ingredient. It’s believed to offer many benefits such as increased energy levels (although it’s not a stimulant) and generally just improve your general health.

However, one thing we’re not convinced that it can do is promote fat loss. Again, there simply isn’t enough studies out there to prove it.

Not only that, Choline Bitartrate has gained a reputation for being capable of causing your body odor to smell fishy – which is something that makes us want to avoid it.

Ultimately, it might be a good ‘bonus’ addition to Axe and Sledge DOUBLE TIME. But we wouldn’t want to smell fishy on a daily basis…

If you’ve ever eaten a Cayenne Pepper before, then you’ll know exactly why and how it works – it’s spicy.

Well, this is exactly how it raises your body temperature (and metabolism) and encourages it to burn more body fat.

You can’t really argue against this product. We know many people who add chilies to their meals to get the same effect. But you get more concentrated amounts of capsaicin with Cayenne Pepper Extract in fat burner supplements.

As a result, we consider Cayenne Pepper Extract to be a key addition in any fat burner supplement, and Axe and Sledge DOUBLE TIME here.

Bad news. This is always a red-flag when we’re looking for the next fat burner to try.

Why? Because Bitter Orange Extract is gaining a bad reputation for being the cause of side effects (in our honest opinion).

For this reason, we always try to avoid consuming Bitter Orange Extract.

If you’re been looking at supplements for a few years, then you would have seen Black Pepper Extract in products before.

But do you know what it does? Well, Black Pepper Extract contains high amounts of piperine, which is able to enhance the overall absorption of supplements.

Ultimately though, this isn’t a ‘make or break ingredient’ so it’s not a key addition to any supplement or Axe and Sledge DOUBLE TIME here. But you can’t deny that it’s a useful ‘bonus’. 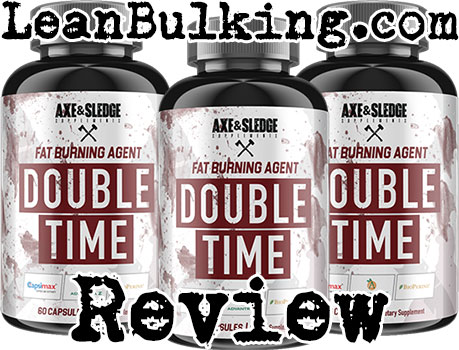 The good news is that most of the ingredients in Axe and Sledge DOUBLE TIME are safe.

However, there are 3 ingredients that we’re slightly worried about (just our honest opinion); Choline Bitartrate, Bitter Orange Extract, and Dandelion Root Extract.

Just to refresh your mind, we’ll quickly go through the reason why we’re worried. Basically, Choline Bitartrate can cause fishy odors in your breath & sweat, Bitter Orange Extract can cause numerous side effects, and Dandelion Root Extract can cause severe dehydration if you’re not careful.

Here are the potential side effects of taking Axe and Sledge DOUBLE TIME:

For a first attempt at a dedicated fat burner supplement, Axe and Sledge Supplements have done extremely well with DOUBLE TIME.

This company has clearly researched well before formulating Axe and Sledge DOUBLE TIME. The fact that it contains some key fat burning nutrients such as Green Tea Extract, Green Coffee Bean Extract, and Cayenne Pepper Extract is great.

However, in our honest opinion, there are some issues with the dosages of the ingredients in this fat burner supplement.

With a few adjustments, this could be one of the best fat burners that we’ve seen. But for now, it doesn’t quite make the cut for us personally.

However, we don’t believe that all of the ingredients have been dosed optimally and effectively.

For this reason, we would spend a bit more cash and choose one of the highest-rated fat burners available right now.