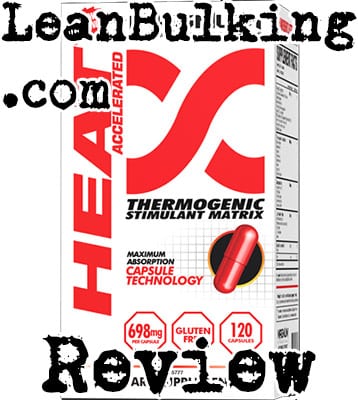 Heat Accelerated is a fat burner supplement made by Magnum Nutraceuticals. It costs $39.99 (on Bodybuilding.com) for 40 serving containers, with a serving size of 3 capsules.

The good news is that a daily serving of 3 capsules is great, as this keeps your body fuelled throughout the day. But there are some issues, such as the overload of stimulants in proprietary blends, which is likely to cause jittery side effects and energy crashes.

We’ll expand on this as we analyze Magnum Heat Accelerated’s nutrient profile for you in the next section. But first, we’ll tell you more about the company behind it.

Who are Magnum Nutraceuticals?

We found Magnum Nutraceuticals website easily on google, which is always good news.

Also, we were impressed by their ‘about us’ page, which is quite a rare occurrence these days; it’s a good sign when a company takes the time to tell you about their business and achievements.

Anyway, we learned that Magnum Nutraceuticals were founded in 2005, and creates all of their products in cGMP certified facilities (which is what all companies should be doing to ensure their products are high quality every time).

That’s the important stuff that we look out for, so Magnum Nutraceuticals have ticked our boxes here. So see which ingredients they’ve added into Magnum Heat Accelerated below…

Magnum Heat Accelerated contains over 20 ingredients, which isn’t a good thing; we’d rather see under 10 optimally dosed nutrients, than 20 underdosed ingredients, as it makes the product more likely to actually work.

Not only that, we can’t ignore that every ingredient has been added into proprietary blends (we’ll expand on this below).

Proprietary blends are mixtures of numerous ingredients that’re only shown to you as 1 quantity. As you can see from the ‘Energy Spiking Agents’ blend on Magnum Heat Accelerated fat burner’s ingredient list, the overall amount is 908mg – but you’re not shown the dosages of each ingredient inside such as Caffeine Anhydrous.

Ultimately, it’s always a good idea to know exactly what you’re putting into your body, to stay safe.

Anyway, we’ll take you through the most important ingredients inside Magnum Heat Accelerated. By the end of this review, you’ll know exactly how safe and effective this fat burner really is. 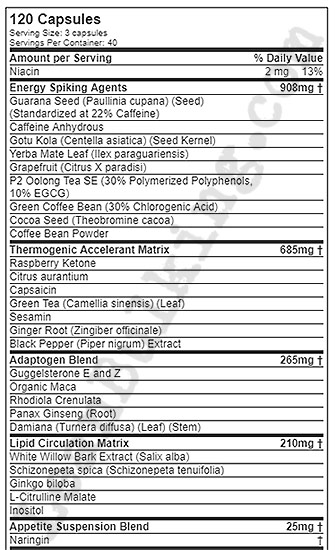 Why is this bad? Well, think about when you consumed too much coffee in the past. Your heart rate would have shot through the roof and you would have experienced jittery side effects.

Now, it wouldn’t be a problem if Magnum Nutraceuticals had clearly listed the exact dosages of each stimulant inside Magnum Heat Accelerated (this would have allowed you to see whether they’d been dosed sensibly and safely).

However, they’ve added all 3 stimulants into the ‘Energy Spiking Agents’ proprietary blend, so

Ultimately, we recommend choosing fat burners containing 1 stimulant, preferably Caffeine Anhydrous as it’s proven to be the safest, in under 100mg servings per capsule.

Green Coffee Bean Extract is a great addition to any fat burner, as it contains high amounts of chlorogenic acid; this makes it one of the best thermogenic nutrients to consume while aiming to lose body fat.

However, as it’s part of a proprietary blend, you don’t know for sure whether it’s been dosed optimally in Magnum Heat Accelerated.

Simply put, even the best ingredients will be ineffective when dosed incorrectly. So this is a great example of why you should try to avoid supplements containing proprietary blends.

The worrying thing is that Magnum Heat Accelerated contains some ingredients that can cause side effects; these include Raspberry Ketones and Citrus Aurantium.

Now, you’re probably quite shocked to hear that Raspberry Ketones can be harmful, as it became known as some kind of ‘miracle’ ingredient a while back.

However, it’s important to know that modern research has shown that Raspberry Ketones are ineffective. And the worst part is that it can cause side effects, due to being chemically treated with Synephrine.

Not only that, Magnum Heat Accelerated also contains Citrus Aurantium, which contains high amounts of Synephrine; in case you’re wondering why Synephrine is bad, it’s been banned from direct use in supplements in the USA, UK and Canada (among others).

So why is it in Magnum Heat Accelerated? Well, companies work through a legal loophole by adding Citrus Aurantium. As it’s not ‘directly’ adding Synephrine into their products, the FDA allow it.

But we do expect Citrus Aurantium to be banned in the future. For this reason, we advise that you try to avoid supplements containing Raspberry Ketones or Citrus Aurantium.

Everyone knows that Green Tea is good for you, and it’s because it contains high amounts of catechins; this is a thermogenic that’s proven to boost your metabolism and help you get shredded.

But here’s the bad news; Green Tea Extract has been added into a proprietary blend, so you can’t see the exact dosage inside Magnum Heat Accelerated.

Studies have shown that Green Tea Extract is most effective when consumed in 500mg dosages. As Magnum Heat Accelerated contains an unknown quantity, you don’t know whether it’s actually going to work in this fat burner.

In case you’re wondering, this is the same stuff you sprinkle on your food to make it taste better.

But it’s actually more useful than you might think; studies have shown that Black Pepper Extract is able to improve your digestion and boost the absorption rate of the supplements it’s added to.

Ultimately, Black Pepper Extract isn’t a key addition to any fat burner. But it can make a great ‘bonus’ addition to it.

We’re confused why Magnum Nutraceuticals have added libido boosting ingredients into Magnum Heat Accelerated; all of the ingredients in this ‘Adaptogen Blend’ are known for being able to raise your sex drive.

However, the overall dosage of this blend only adds up to 265. Considering there’s 5 nutrients inside, there’s not going to be an effective dosage of each ingredient here.

For this reason, we consider this whole blend to be unnecessary and likely to be ineffective too. 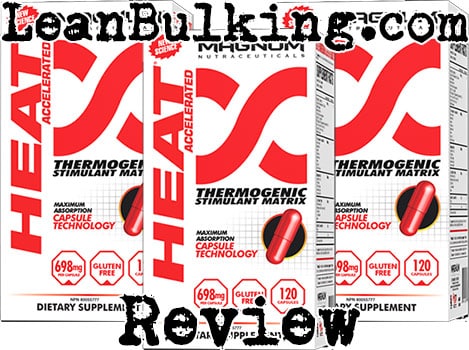 We’ve analyzed the main side effects for you already, but just in case you skimmed past, we’ll give you a quick overview in this section.

Basically, Magnum Heat Accelerated contains 4 different stimulants, making it likely for you to suffer from jittery side effects. This is why we always advise that you consume under 100mg dosages of stimulants per capsule in fat burners.

Not only that, Citrus Aurantium and Raspberry Ketones have also been commonly reported to cause side effects.

Here’s the potential side effects from taking Magnum Heat Accelerated:

It’s a shame that Magnum Nutraceuticals have added every ingredient inside this fat burner into proprietary blends; Magnum Heat Accelerated contains some great nutrients, so if they were clearly dosed optimally, this fat burner might have even competed with the highest rated products on the market.

However, you can’t ignore that Magnum Heat Accelerated contains an overload of stimulants, which is likely to cause jitters and energy crashes. Along with Citrus Aurantium and Raspberry Ketones, you’re almost certain to suffer from side effects with this fat burner.

Ultimately, we advise you to choose fat burners containing fewer ingredients that have been dosed optimally. This will ensure you choose a safe and effective fat burner that is likely to work.

While Magnum Heat Accelerated contains some great ingredients, the risk of suffering side effects outweight the benefits of this fat burner.

For this reason, it can’t keep up with the highest rated fat burners on the market.