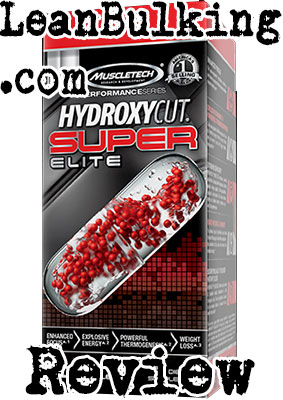 Hydroxycut Super Elite is a fat burner supplement made by MuscleTech. It costs $59.99 on bodybuilding.com, GNC and MuscleTech’s website for 30 serving containers.

This fat burner has a serving size of 3 capsules per day; this is great, as we always advise you to choose fat burners that offer 3-4 daily capsules (studies have shown that this is the optimal serving size for fat loss).

Anyway, we’ll analyze Hydroxycut Super Elite’s nutrient profile after telling you more about the company behind it.

MuscleTech are a well-respected supplements company that have been around since 1998. But not many people know that they’re owned by a bigger company, called Iovate Health Sciences Inc.

Basically, MuscleTech’s reputation is evident as they sponsor high-level athletes such as Abel Albonetti and Lauren Abraham, among others. Anyway, let’s see which ingredients are inside Hydroxycut Super Elite, to see how effective this fat burner is, and if it’s worth trying out, in the next section below.

Hydroxycut Super Elite contains 6 main ingredients overall, which we’ll anlayze for you in this review. This is a great number of ingredients to have in a supplement; we always advise you to stay away from products containing over 10 nutrients, as these are usually under-dosed and therefore ineffective.

So there’s a good amount of nutrients inside this fat burner, but does it contain tried-and-tested ingredients? Well, this is exactly what we’ll be looking at for you.

We’ll take you through each ingredient inside Hydroxycut Super Elite – so you can see how effective this fat burner really is. 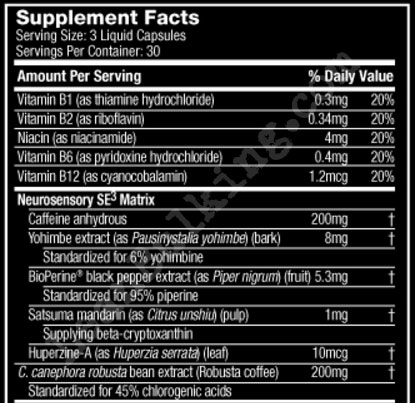 A great start by MuscleTech here. In case you’re wondering, Caffeine Anhydrous is basically caffeine in powder form, so it can be added into supplements.

Caffeine Anhydrous is one of our favorite ingredients you can find in fat burners; it can raise your energy levels, which is great for when you’re cutting carbs and calories from your diet, in order to lose body fat.

However, it’s always a good idea to check the dosage of Caffeine in supplements. This will ensure that you stay safe from side effects such as jitters or energy crashes.

As Hydroxycut Super Elite contains 200mg Caffeine, you’ll be safe from these side effects here, while benefiting from enhanced strength, endurance, energy and focus.

But remember to avoid supplements containing over 2oomg Caffeine – to stay safe from jittery side effects.

Yohimbe is basically extracted from the bark of the yohimbe tree, which is native to Central Africa. It’s added to fat burner supplements, as it’s shown to be able to promote fat loss.

However, we advise you to stay away from supplements containing Yohimbe; this is because Yohimbe has been reported to cause numerous side effects when orally consumed.

For this reason, we never advise you to buy fat burner supplements containing Yohimbe. Ultimately, adding this ingredient was a big mistake by MuscleTech – a company as reputable as MuscleTech, who’ve been around since the 90’s, should know better.

So what does it do? Well, Black Pepper Extract has shown to improve your digestion and the absorption rate of supplements that it’s contained in.

For this reason, we consider Black Pepper Extract to be a great ‘bonus’, rather than a key fat burning ingredient. Ultimately, we would have preferred MuscleTech to have added a more effective nutrient, such as Green Tea Extract instead.

This is basically just orange juice extract. Yes, it’s the same satsuma mandarin that you can buy in stores, and is pretty tasty to drink as juice.

However, there hasn’t been any study that suggests Satsuma Mandarin can help you burn more body fat – making it a useless addition to Hydroxycut Super Elite.

We believe that MuscleTech have looked into using this to replace Bitter Orange Extract (Synephrine), as it’s been banned in certain countries such as the UK & Canada.

However, we would preferred to have seen Green Tea Extract here instead, or an ingredient that can surpress your appetite such as Glucomannan. It’s extremely important for a company to exhaustively research while they formulate their products, and this is something that MuscleTech haven’t seemingly done.

Although good marketing can help sell a product, ultimately it’s the ingredients that determine whether the supplement will help you shred fat or not. And Satsuma Mandarin won’t help you do this at all.

Huperzine A is a chemical that’s believed to enhance your cognition (memory, focus & alertness).

However, there hasn’t been any study that shows Huperzine A can promote fat loss – making it an unnecessary addition to Hydroxycut Super Elite.

It’s more suited to a Nootropic supplement, but we don’t even advise you to look for it in these products. Why? Because Huperzine A is known to cause numerous side effects (we’ll expand on this in the side effects section further down).

For this reason, we advise that you stay away from supplements containing Huperzine A – to stay safe and avoid wasting your money.

Right, we probably seem like we’ve heavily criticized Hydroxycut Super Elite here, so we’re going to justify our review in this section.

Basically, we’re going to show you which ingredients that are safe, and proven to actually help you lose your unwanted body fat – without suffering from any side effects.

In all fairness to MuscleTech, they’ve included one of the best thermogenic nutrients (Green Coffee Bean Extract).

However, we’ll list the nutrients that would have raised our ranking of Hydroxycut Super Elite below: 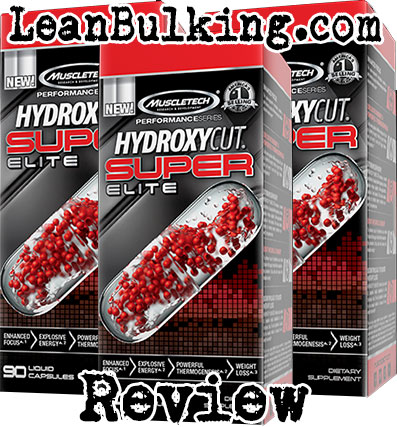 Most of the ingredients inside Hydroxycut Super Elite haven’t been reported to cause side effects, but that doesn’t mean it’s 100% safe. In fact, this fat burner contains Yohimbe, which has proven to cause numerous side effects, which we’ll list below.

Simply put, we advise you to try to avoid supplements containing Yohimbe, to stay safe from any potential harm. We believe it’s only a matter of time until the FDA ban YOhimbe anyway (they’ve already placed a warning on this ingredient).

But that’s not all; Huperzine A has also consistently been reported to cause numerous side effects, and is another ingredient we advise you to avoid when choosing a fat burner supplement.

There’s no need to risk your health in order to lose fat – especially when there’s 100% natural and safe ingredients that have been tried-and-tested to help you shred body fat.

Here’s the potential side effects from taking Hydroxycut Super Elite:

There’s no denying that MuscleTech are a great, well-respected company, but even the big-boys make mistakes now and then.

Ultimately, adding Yohimbe & Huperzine A, while leaving out key fat burning ingredients (that we’ve listed above) has led to the downfall of Hydroxycut Super Elite.

We never recommend any supplements that can cause side effects, because we don’t think suffering from them is worth it. Especially when there are tried-and-tested nutrients available, that haven’t been reported to cause side effects.

But we’ll give credit where it’s due; MuscleTech has added 1 key fat burning nutrient, in the form of Green Coffee Bean Extract (which has proven to boost your metabolism, being one of the best thermogenic nutrients available).

For $59.99 you can get one of the highest rated fat burners available, so we don’t think MuscleTech’s Hydroxycut Super Elite lives up to its price tag here.

This contains ingredients reported to cause side effects, so we can’t advise you to try it out.  Ultimately, you can stay safe while losing fat, but not with this product.