Extreme Edge Pre Workout is a supplement made by a company called Extreme Edge. It costs $35.67 for 60 serving containers and comes in ‘Savage Lemon’ flavor.

Not a bad price for the amount of servings – we’ll be checking whether the ingredients make it a good deal in the next section.

Who are Extreme Edge?

Extreme edge are a company that own numerous supplement brands such as Bluebonnet Nutrition. They market a range of products – from whey protein powders to pre-workouts such as Extreme Edge Pre Workout.

We’ve not heard of this company before, so let’s see whether this supplement can help get them noticed.

This is the most important part of this review; a supplement’s ingredients determine how good it is, and whether it causes any side effects.

However, from first glance we see something we don’t like – Extreme Edge Pre Workout contains proprietary blends…

Proprietary blends are mixtures of numerous ingredients that’re only shown to you as 1 quantity. As you can see from the ‘Explosive Energy & Mental Focus AMP Stack’ on Extreme Edge’s ingredient list, the overall amount is 1,325mg – but you’re not shown the dosages of each ingredient inside such as Beta-Alanine.

Anyway, we’ll take you through each ingredient inside Extreme Pre Workout – so you can see how effective it really is. 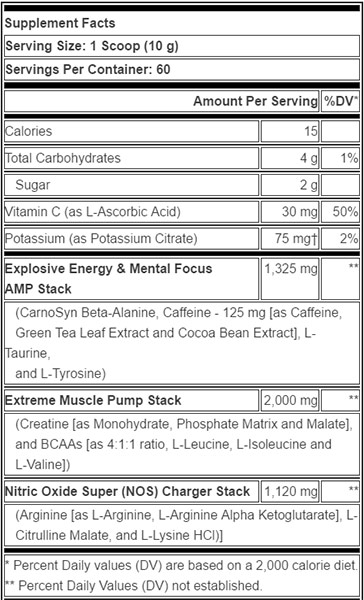 This is a patented form of Beta-Alanine; we don’t like patented ingredients, as this raises the price of supplements without offering any other benefits.

Anyway, we have mixed opinions on this ingredient; Beta-Alanine has shown to enhance muscular endurance, but it causes paresthesia.

Paresthesia is one of the most commonly reported side effects from taking pre-workout supplements (as Beta-Alanine is a popular ingredient in these supplements). Personally, we don’t like this side effect so we avoid pre-workouts containing this.

Creatine Monohydrate offers the same benefit without causing any side effects – and as Creatine is also inside Extreme Edge, there’s no need for Beta-Alanine in Extreme Edge Pre Workout.

Caffeine is the safest and most reliable stimulant available, which is why it’s our favorite stimualants in pre-workouts and fat burner supplements.

However, it can cause jitters when consumed in large quantities (which many pre-workouts contain). Extreme Edge has done well to dose Caffeine sensibly in Extreme Edge Pre Workout, so you should be safe from jitters here.

This is an organic acid containing sulfur that’s mistakenly believed to raise your energy levels – but studies have shown that it doesn’t boost your energy.

The only thing it’s good for, is reducing cramping; however, this same benefit can be achieved by drinking enough water and keeping yourself hydrated.

Taurine doesn’t cause any side effects, so there’s no negatives to having this in Extreme Edge Pre Workout. But it’s not a key ingredient, and we wouldn’t notice if it was missing from this pre-workout.

This is a ‘brain-boosting’ ingredient that can improve your cognition (focus, attention and memory). However, Caffeine delivers this benefit, so there’s no need for L-Tyrosine.

The only time when L-Tyrosine is useful, is in stim-free pre-workouts (the ones that don’t contain Caffeine).

This is one of the most reliable ingredients in the supplements industry; Creatine has been used by athletes since the 1980’s and first gained popularity after Olympic gold medalists began taking it during the 1990’s.

Since then, numerous studies have proven that it works –  in fact, it’s common knowledge that Creatine Monohydrate works and you can’t argue against the masses of people who’ve used it.

For this reason, we’re always happy to see Creatine Monohydrate on ingredient lists. However, as it’s part of a proprietary blend, you don’t know how much is inside – studies have shown you need at least 1,000mg for it to work.

This is a great example of why we hate proprietary blends.

There are 3 Branched Chain Amino Acids that make up BCAAs – L-Leucine, L-Isoleucine, and L-Valine. They’ve shown to promote muscle protein synthesis (muscle growth), but we prefer to take them after our gym session – not before.

For this reason, we believe BCAAs aren’t needed in Extreme Edge Pre Workout. We would’ve preferred ingredients such as L-Carnitine (which has shown to reduce fatigue and boost your mind-muscle-connection in the gym).

This is one of the gimmicks in pre-workouts that companies add – to make you think its better than it is. Simply put, Arginine is ineffective when orally supplemented due to its poor absorption rate (meaning it doesn’t work in pre-workout supplements).

However, Arginine plays an important role in raising your nitric oxide levels – which improves your blood flow, resulting in enhanced muscle pumps.

This is why Citrulline Malate is the best ingredient for improving your muscle pumps; Citrulline converts into Arginine in your kidneys, solving the problem of Arginine’s poor absorption rate.

As we just mentioned above, Citrulline Malate is your best option for improving muscle pumps. However, studies have shown that you need a dosage of at least 6,000mg per serving for it to work.

As Citrulline Malate is part of a proprietary blend that adds up to 1,120mg – it’s not possible for there to be an effective dosage in Extreme Edge Pre Workout. 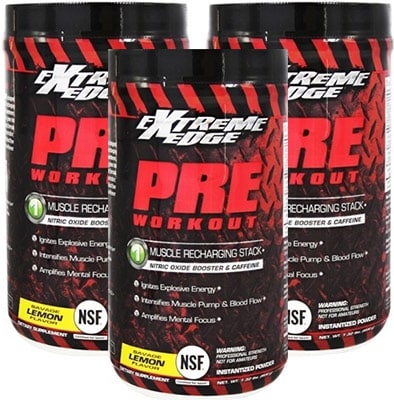 See Your Best Options In Our
– Top Rated Pre-Workout Page –

Our favorite thing about this pre-workout, is that it contains a sensible dosage of Caffeine – we recommend that you always consume under 200mg Caffeine in these supplements, to avoid any jitters or energy crashes.

However, it’s a shame that all of its ingredients are part of proprietary blends (meaning it’s not likely to work).

If Extreme Edge Pre Workout didn’t hide its ingredients inside proprietary blends, and contained optimally dosed ingredients instead – then we would’ve given this supplement a much higher rating.

But proprietary blends are often used to cut costs while keeping the price high; these blends allow companies to add ineffective dosages into their supplements without you knowing (making them one of the biggest gimmicks in the industry.

We can’t recommend you to buy Extreme Edge Pre Workout.

We believe that there are many better pre-workout supplements for you to choose from that contain better ingredients in optimal dosages (in our honest opinion).