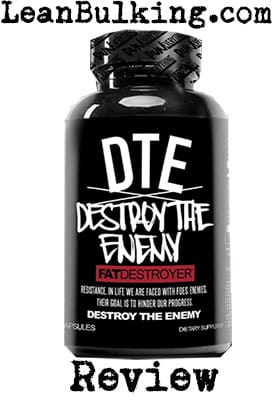 Destroy The Enemy (DTE) is marketed by Run Everything Labs as their Fat Destroyer supplement. It comes in 30 serving containers, with a serving size of 3 capsules per day.

This is a good amount of daily servings - its good to have 3-4 capsules spread throughout the day, to keep your body topped up with fat burning ingredients. So full marks for Destroy The Enemy here.

Who are Run Everything Labs?

Run Everything Labs are a supplements company based in USA. They market a range of products, from vegan protein powders to this fat burner.

From what we can see, it was founded by Dana Linn Bailey (a female fitness icon) and Rob Bailey. Theyve got the right credentials to offer good products, so lets take a look at whats inside.

Destroy The Enemy contains 8 ingredients. The first thing we look for in fat burners, is whether the Caffeine has been dosed sensibly (dosages over 100mg per capsule can cause jitters and energy crashes - and were glad to say Run Everything Labs has done well here, with just over 83mg Caffeine per capsule.

We wouldnt experience side effects from the Caffeine, but we were disappointed to see Bitter Orange and Rauwolscine in Destroy The Enemy. Both of these ingredients have caused us problems in the past, and we personally wouldnt buy any supplements containing these ingredients.

Anyway, well take you through each ingredient - to show you how good Destroy The Enemy fat burner really is. 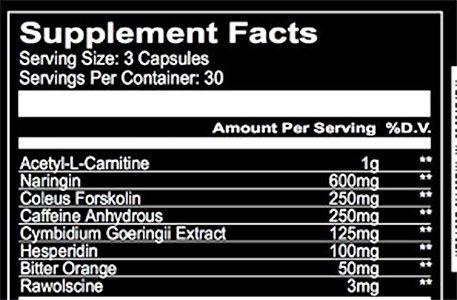 Also known as ALCAR, this ingredients main benefit is reducing fatigue and muscle damage - which is why its one of our favorite ingredients in pre-workout supplements.

However, its still useful in a fat burner, as its shown to promote fat loss in a few studies. Its not as effective in a fat burner as ingredients such as Green Tea Extract, but its not bad either.

In fact, ALCAR is one of the best ingredients inside Destroy The Enemy fat burner.

This is a bioflavanoid found in Grapefruit - all you need to know is that its the reason why grapefruits taste bitter.

Its believed to improve your metabolism, but theres been very mixed results in studies (making it unreliable). Its not known what dosage of Naringin is needed for it to work, so no-one knows whether the dosage in Destroy The Enemy will work.

Apart from sounding like foreskin (which really puts us off this ingredient), Coleous Forskolin is another unreliable ingredient in Destroy The Enemy. Its not proven to work, but is believed to promote fat loss.

We cant recommend this ingredient until further studies prove it works (were writing this in 2017).

This is one of our favorite ingredients in both fat burners and pre-workout supplements.

This why: Caffeines proven to boost your strength, endurance, focus and energy levels (which are all great benefits in a fat burner). Basically, it helps boost energy while cutting calories and aiming to lose body fat.

Run Everything Labs has done well by adding a sensible dosage in Destroy The Enemy - other companies add in large dosages to make their fat burner stronger, but all this does is increase your risk of suffering from side effects.

This is a type of orchid plant thats found in Asian countries such as Japan. Its believed to reduce stress and raise nitric oxide levels, which would enhance muscle pumps in the gym.

However, these arent key benefits for a fat burner (personally, wed buy fat burners to promote fat loss). Not only that, its not proven to work - meaning its unreliable.

Hespiridin is another unreliable ingredient not shown to work in any studies. But its believed to improve blood flow (as weve mentioned, this isnt really a key benefit of a fat burner supplement).

Also known as Synephrine, this is the worst ingredient in Destroy The Enemy. Basically, its been reported to cause numerous side effects and has been banned in the UK and Canada for this reason.

Weve had bad experienced with Bitter Orange before, and for this reason, we refuse to take any supplement containing it.

This is another bad ingredient inside Destroy The Enemy fat burner. Simply put, its commonly caused numerous side effects and has also been banned in the UK, among other countries. 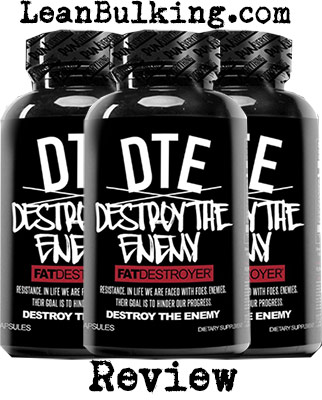 There are 2 ingredients in Destroy The Enemy that can cause side effects - Bitter Orange and Rauwolscine.

We usually avoid supplements containing these ingredients, as weve had bad experienced with them in the past (especially Bitter Orange). Simply put, these ingredients are both banned in the UK and other countries for causing numerous side effects and being labelled as unsafe.

Heres the potential side effects from taking Destroy The Enemy:

Ultimately, were disappointed with Destroy The Enemy (DTE) fat burner. Run Everything Labs did well to dose Caffeine sensibly, but ruined the product by adding Bitter Orange and Rauwolscine (which can both cause numerous side effects, as you can see above).

The list of potential side effects are what kept us from trying this fat burner - we actually refuse to take anything containing Bitter Orange and Rauwolscine inside (as weve experienced side effects after taking them in the past).

For this reason, we cant recommend anyone to try Destroy The Enemy. But there are at least 3 fat burners available that are better and safer than this.