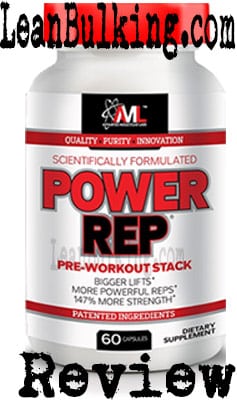 Power Rep is a pre-workout supplement made by Advanced Molecular Labs. It costs $59.99 for 30 servings, and comes in 2 capsule servings - most pre-workouts come in powder form, but its not a bad thing that Power Rep comes in capsules.

The strange thing is that it only contains 3 ingredients (but well expand on this in the next section).

Who are Advanced Molecular Labs?

Advanced Molecular Labs are actually one of the oldest supplement companies around - but they havent been very successful with supplements recently.

Anyway, none of that matters to us - we only care about whether Power Rep contains good ingredients in optimal dosages. Lets see whats under the hood.

We cant believe that Advanced Molecular Labs are trying to sell this for almost $60; it only contains 3 ingredients with an overall dosage of 650mg! To put this into perspective of how small each serving is, the optimal dosage of one of our favorite pre-workout ingredients, Citrulline Malate (which isnt in Power Rep) is 6,000mg.

Anyway, well analyze each ingredient in detail - so you can see how good Power Rep really is.

We can see why Advanced Molecular Labs has added this in Power Rep, but theyve shown their lack of expertise here. Basically, your body uses ATP as energy, so it increases your endurance in the gym (creatine boosts your ATP levels, which is why it improves your strength and endurance levels).

However, studies have shown that its not very effective when orally supplemented. For this reason, we prefer Creatine Monohydrate in pre-workouts, as its been proven to work since the 1980s.

Its strange that the company who claims to have created the first creatine supplement hasnt added it into their product that needs it the most.

Also known as Bitter Orange Extract, this has shown to promote fat loss - but its been banned in numerous countries after causing unwanted side effects. For this reason, we avoid supplements containing Syneprhine (weve had some bad experiences with this ingredient before).

In fact, we recommend that you stay away from any banned substances in supplements - to stay safe and not waste your cash (who wants to pay for a product that might make you feel like sh*t?).

This is quite a new discovery in the supplements industry, so its good to see an old company like Advanced Molecular Labs keeping up with the younger competition. Basically, Theacrines a stimulant that offers the same benefits as Caffeine - but its shown to be more effective for long-term usage in a few studies (as its believed humans dont build a tolerance to Theacrine).

However, the bad news is that Theacrines not proven to be 100% safe or effective yet; as there hasnt been enough studies conducted on it, were holding back before really getting behind this ingredient.

For now, Theacrine is unreliable (so might not work) - but well be posting about this ingredient if it ever proves to be safe and effective in the future. 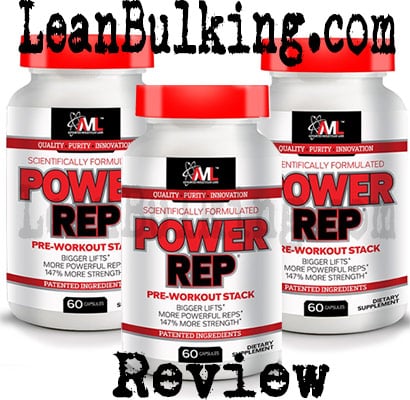 As weve mentioned just above, Synephrine has been banned in numerous countries after causing harmful side effects; as its contained in Power Rep by Advanced Molecular Labs, this pre-workout is likely to cause side effects.

Not only that, Theacrine isnt 100% proven to be safe yet; meaning theres the possibility it might cause unknown side effects (as its a stimulant, most probably jitters and energy crashes).

We cant believe Advanced Molecular Labs has managed to create a pre-workout that could cause side effects - after only adding 3 ingredients!

Heres the potential side effects from taking Power Rep:

This probably sounds like a harsh review. But we simply cant give a good rating to a pre-workout that can cause side effects and only contains 3 ingredients (especially for almost $60 per bottle!).

Not only that, the overall dosage of ingredients inside Power Rep only adds up to 650mg (this w0uld be a small dosage for some ingredients alone; such as Citrulline Malate, which you need 6,000mg of for it to work).

The worst thing is that Advanced Molecular Labs only chose 3 ingredients for this pre-workout, and they managed to include a potentially harmful one - Synephrine. This is actually quite impressive…and it shows that they havent done their research.

In fact, Advanced Molecular Labs claim that they created the first creatine supplement back in the day - so its surprising that they havent added it to Power Rep (as Creatine Monohydrate is shown to improve strength and endurance in the gym).

For these reasons, we cant recommend you try this pre-workout - especially when there are much better supplements available for a better price.