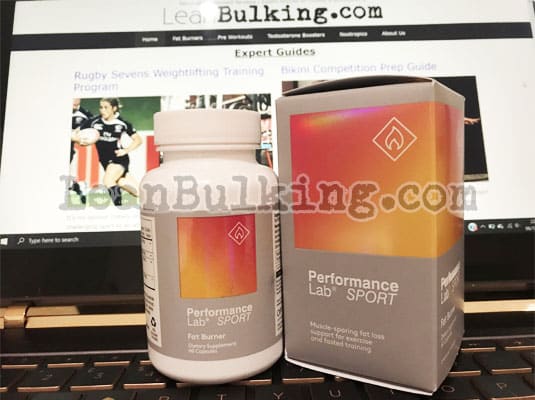 Burn is a fat burner supplement made by Performance Lab.

It comes in 30 serving bottles at a price of $50 (£40), so it’s not the cheapest option on the market – but it’s also not the most expensive either.

We think it’s pretty good value for money, considering it only contains premium ingredients without any artificial coloring or ingredients (more on this later in our review).

There is currently on offer for ‘Buy one, get one free’. Effectively making a 2 month supply of Performance Lab Burn $25 per bottle, making it an extremely attractive fat burner compared to the rest of the market.

In a nutshell, Performance Lab Burn is the perfect fat burner for those concerned about losing muscle mass during their weight/fat cut.

This is because it contains tried-and-tested nutrients (such as HMB) that help ‘protect’ muscle mass from being used as energy. So you look even better after you shred the fat.

Who is Performance Lab?

There’s a chance you haven’t heard about Performance Lab before. It’s still a relatively new company, but they’ve been making waves in the supplements industry – becoming known for their quality and cleanest products on the market.

Basically, what makes Performance Lab products clean is this: none of their supplements, including Burn, contain artificial ingredients, colors or flavors.

This makes Performance Lab supplements the cleanest we’ve seen on the market.

Even the capsules for their products are made from their own patented ‘NutriCaps’; these capsules are made from prebiotic fiber, making them better than the cellulose/HPMC options that all other companies use.

We’re not personally vegan. But if you are, then there’s good news – Performance Lab supplements are also vegan-friendly as an added bonus.

You can find out more about Performance Lab through their ‘About Us‘ section.

This is something that’s perhaps been neglected by many people on their fitness journey.

It’s easy to get stuck in the ‘bulk and cut’ cycle. But it’s also just as easy to lose your hard-earned muscle mass while you aim to cut body fat.

Now, we’re not saying that a fat burner is a magic pill that will fix all of your problems. Because they don’t work miracles.

However, if you keep your protein intake high while on a weight/fat cut, alongside consuming muscle protecting nutrients such as HMB and Coleus Forskohlii, then you’ll certainly give yourself the best chance of success.

…this fat burner contains HMB and Coleus Forskohlii, as well a tried-and-tested thermogenic in Cayenne Pepper Extract to help you burn fat while maintaining as much muscle mass as possible.

To explain in more detail how Performance Lab Burn works, we’ll take you through a full analysis of its supplement facts label in the section below.

We always give you the honest truth without any BS. This is the only way that you won’t get ripped off and we believe it’s what separates us from other websites out there.

So, it’s important to know this: the effectiveness of a supplement, such as a fat burner, depends on its ingredients and their dosages.

The above is one of the reasons why we like Performance Lab’s fat burner, Burn; on their website, it clearly explains the science behind how their ingredients work and provide the relevant clinical studies to back up what they tell you.

It’s actually refreshing to see a supplements company not replying too heavily on marketing gimmicks. So a big thumbs up to Performance Lab from the team at LeanBulking.com for this reason.

In all honesty, the product page for Performance Lab Burn gives you all the info you need about its ingredients. But since this is our review, we’ll tell you what you need to know anyway.

For us, this is the star of the show.

It’s the reason why this fat burner stands out and is actually worth taking on a long-term basis; we take Performance Lab Burn when in ‘maintanence’ mode as well as when we’re trying to cut body fat, which is roughly 6 months at a time.

In a nutshell, HMB (ß-Hydroxy ß-Methylbutyrate) is a metabolite of the branched-chain amino acid leucine.

So what makes it so important?

We consider HMB to be an ‘insurance policy’ while in a calorie deficit to help us maintain as much muscle mass as possible. And in our opinion, it’s helped us achieve some impressive results (which we’ll show you in progress pictures later on in this review).

Coleus Forskohlii is still quite a recent addition to supplements in general (considering the amount of time other nutrients, such as Creatine Monohydrate have been around for).

It almost seemed too good to be true when it first appeared in supplements.

A few years ago, there wasn’t enough clinical studies backing its effectiveness to be reliable – fast forward to today, and it’s been proven to be one of the best ingredients in terms of protecting and increasing lean muscle mass.

So what is Coleus Forskohlii? Well, it’s an ayurveduc herb that contains high amounts of Forskolin. Which is the active ingredient that all the clinical studies have been based around.

We mentioned earlier that Performance Lab Burn contains premium-grade ingredients; it contains a patented and highly tested form of Coleus Forskohlii, called ‘Forslean’ which is known to be more clinical than the regular form.

You don’t need to look at clinical studies to know that Cayenne Pepper Extract works.

It contains high amounts of capsaicinoids which is responsible for the ‘spiciness’ of these chili peppers. As well as for its metabolic boosting and fat burning effects, due to being a thermogenic.

As you know, after eating a Cayenne Pepper, your body temperature and heart rate will increase naturally due to its ‘spice’. Well, these effects is exactly how it works to promote fat loss via thermogenesis.

Even better, it won’t keep you up at night or cause jittery side effects as it’s not a stimulant. So it’s safe too.

Performance Lab have used the patented and highly respected ‘Capsimax’ in Burn; this has shown to be much more beneficial than ordinary Cayenne Pepper Extract, due to being able to eliminate the ‘gastric burning’ effect that chili peppers can have on your body.

Black Pepper Extract is perhaps the least exciting ingredient found in any fat burner. But it works.

Basically, Black Pepper Extract contains high amounts of the active ingredient, piperine; this works by improving the absorbtion rate of other ingredients that it’s taken alongside, as well as improving digestion too.

We always test each supplement before recommending them, here at LeanBulking.com.

As mentioned, what originally attracted me to Performance Lab Burn was its claim to protect muscle mass while in a fasted state (or calorie deficit).

This is because I’d lost some of my hard-earned muscle mass while cutting body fat in the past. And it had taken me considerable amount of time to gain back that muscle mass afterwards – something that can be very demotivating on your fitness journey.

So I wanted to put Performance Lab Burn to the test over 4 months. And I was very impressed with the results.

Check out my Performance Lab Burn results in progress pictures below:

When ‘shocking’ your body into fat loss, month 1 can be a great time to see progress.

The reason I wanted to cut bodyfat was because I got lazy over the Christmas period (like many of you do).

However, I ate so much and became so inactive that I blew up to 30% bodyfat…pretty impressive, right? So you can’t blame me for seeking out a fat burner supplement and planning a fat loss routine.

My plan during the first 2 months

My maintenance calorie intake is around 2000 calories per day (including calories burned by weightlifting in the gym). As a result, I started by reducing my calorie intake by 500 calories, in order to achieve a calorie deficit.

I didn’t want to change my gym routine at all; I wanted to see if I could maintain my muscle mass and strength.

Here are the key things I did throughout the 4 months:

I kept track of my strength level by seeing if I could stay on the same dumbbells for bench press and keep the same weight on the barbell for squat and deadlifts. Although, I was a few reps down – instead of 4 sets of 8 reps, I was now performing 4 sets of 5.

Ultimately, I felt great throughout the first 2 months while taking Performance Lab Burn and being in a calorie deficit.

My strength stayed the same and I didn’t appear to lose any muscle mass.

But what I achieved in the space of 2 months was even more impressive; I managed to halve my bodyfat percentage from 30% to 15% bodyfat by the end of the 2nd month (8 weeks total).

In all honesty I was pretty happy with my progress after just 2 months on my diet plan and taking Performance Lab Burn.

I’d already managed to cut half my bodyfat percentage and stay on the same dumbbells/weights on barbell in the gym. It was clear that being in a calorie deficit alongside taking Performance Lab Burn was effective at shredding the body fat.

Realistically, I was never going to halve my bodyfat percentage again from 15% to 7.5% (remember to stay realistic with your goals).

For this reason, I wanted to really test Performance Lab Burn’s ability to protect muscle mass in the final 2 months.

The good news is that I saw some incredible results.

You’ll see in my progress pictures below from the final 2 months.

But in further detail:

I have ‘zoomed’ in a bit on the final progress picture (on the right, above).

So it might look like I gained muscle mass – while this isn’t true, I certainly didn’t lose a significant amount of muscle mass and I looked much more toned on the arms and chest.

I’ll never recommend a fat burner (or any supplement) if it causes bad side effects. It’s simply not worth paying for a premium product if it’s going to potentially harm you.

The good news is that I didn’t experience any side effects during the 4 months I took Performance Lab Burn.

This is most likely because Performance Lab Burn doesn’t contain stimulants such as Caffeine. So, I could continue drinking my daily green teas without putting myself at risk of consuming too much caffeine.

In terms of losing weight and maintaining muscle mass, the results I saw while taking Performance Lab Burn were pretty impressive.

While being in a calorie deficit and taking other fat burners only containing thermogenic ingredients before, I had lost a significant amount of muscle mass. So I was really pleased when I maintained the majority of my strength in the gym and appeared to keep most of my hard-earned muscle mass built over the years.

You can’t argue with my results.

Performance Lab Burn will work. As long as you train right and eat in a calorie deficit.

But remember: no fat burner is a ‘magic pill’ that works while you sit on the couch.

Here are some key tips when aiming to burn fat and maintain muscle mass that worked for me, while taking Performance Lab Burn: